LEDs are a rapidly maturing technology that is making big inroads into the conventional lighting market. However, it is not the only new lighting technology in town. Organic LEDs (OLEDs) are now being considered as an option for some architectural lighting applications after gaining popularity as a display technology offering vibrant color without backlighting.

OLEDs differ from conventional LEDs in that the electroluminescence is not derived from a semiconductor junction, but is generated from a film of organic compound. That makes OLEDs simple to manufacture into large, lightweight, and even flexible panels. However, despite some key advantages over traditional LEDs, the devices are not yet available as a commercial lighting option primarily due to low efficiency and high costs compared to solid-state light sources.

This article describes the performance of today’s commercial-lighting OLEDs and compares it to established technologies, including LEDs.

An alternative to LEDs

LEDs are still a relatively new technology, but hundreds of millions of dollars of development has seen it move into the mainstream. LEDs are compact, energy-efficient products that promise long life and lighting topologies that were previously impossible with fragile and bulky incandescent bulbs and fluorescent tubes.

Despite their obvious appeal, LEDs do have some drawbacks. Chief among these is sensitivity to raised operating temperature, which affects efficacy, color, and longevity. Another key drawback is current sensitivity. The current driving the LED must be maintained in a very narrow range; too low and the device fails to illuminate properly, too high and efficiency tails off rapidly.

In addition, LEDs are a ‘point’ light source requiring lenses and optics to diffuse the light over a wide area. (Technically speaking, LEDs are Lambertian emitters meaning that the emitted light is somewhat diffused and viewable from different angles, but to the human eye the light does seems to come from a very small area.)

Sandwiching organic (carbon-based) films between two charged electrodes, one a metallic cathode and the other a transparent (typically glass) anode forms an OLED. When a voltage is applied, the holes and electrons recombine in the emissive layer and generate electroluminescence. (For more on how OLEDs work, see the TechZone article “OLED Displays Offer Brighter Images, Save Power”.) Note that electroluminescence is also exhibited by LEDs (see the TechZone article “Whiter, Brighter LEDs”).

OLEDs have been commercialized for use in display technologies because they emit vibrant color and do not require a secondary source of backlighting for illumination (unlike conventional LCD displays). OLED technology lends itself to thinner and lighter displays because of the elimination of any backlighting and relatively simple construction. These advantages even offer the prospect of flexible displays, although this form of the technology is in its infancy and not yet commercially available.

Until recently the design engineer was more likely to come across OLEDs in character and graphic-type displays manufactured by companies like Newhaven Display (Figure 1), rather than commercial OLED lighting. But as we will see shortly, this is changing. These modules come in standard sizes and can be used as compatible replacements for LCD (or vacuum fluorescent display, VFD) modules.

Figure 1: Character and graphic-type OLED displays are a compelling alternative to LCDs (Courtesy of Newhaven Display).

Manufacturers have become excited by the prospect of OLEDs for lighting because they offer a number of advantages over LEDs. OLED luminaires do not run hot so no thermal management techniques such as bulky and expensive heat sinks are required. Cool-running OLEDs can be positioned where LEDs cannot (for safety reasons), such as directly against wood and plastic surfaces. OLEDs could, for example, be embedded into furniture.

OLEDs, like LEDs, are Lambertian emitters, but with a much wider viewing angle which extends up to 170°C. The light-emitting substance can be sandwiched into a large panel, which, when switched on, is completely illuminated with a diffuse, glare-free, high-quality “warm” white light (Figure 2). When the panels are turned off, they can either be up to 85 percent transparent, or have a mirror-like or milky appearance.

Because OLEDs are essentially plastics, the panels are thin and light and can be molded into virtually any shape – allowing luminaire designers much more creative freedom than was previously possible. They do not use the fragile and expensive glass of incandescent bulbs or fluorescent tubes, the brittle silicon of conventional LEDs, or mercury of compact fluorescent lights (CFL). The low weight and robustness of OLEDs panels makes them particularly suitable for use in aircraft and cars, where every gram counts.

OLED luminaires can be made in a wide range of colors and by combining small molecules or polymers with fluorescent and phosphorescent dyes in the transport and emissive layers. Manufacturers ensure that the individual OLED pixels emit light of a tightly controlled wavelength, aiding color reproduction and gamut. OLEDs reach full luminosity without any warm-up phase and are continuously dimmable making them suitable for any kind of ambient lighting.

An example of what OLEDs can do has recently been demonstrated by OSRAM with its “Rollercoaster” designer luminaire (Figure 3). In this fixture, the 30 wide-area light sources each have a luminous surface measuring 180 x 65 mm. The company claims that the luminaires’ efficacy of 20 lm/W and transmission ('transparency') of 57 percent is a first for OLED panels of this size.

Despite these advantages, OLEDs have yet to be considered as a serious option for mainstream lighting for three key reasons: cost, longevity, and efficacy.

An incandescent bulb produces light that costs about $0.001/lm compared with $0.01/lm for a CFL and $0.02 for an LED (these estimates consider device cost only, and do not include running, maintenance, or end-of-life disposal-costs). Commercial OLEDs currently cost about $1/lm or a thousand times more than an incandescent bulb.1

OLED lifetimes are comparable with conventional light sources, but lag well behind LEDs. White OLEDs last about 10,000 hours before their output degrades to about 50 percent of the original output. This compares with a lifetime of 1,000 hours for an incandescent bulb, or 12,000 hours for a CFL.2 LEDs last much longer, with white devices surviving at least 50,000 hours before fading to 70 percent of their original brightness. By way of review, the LED industry considers an LED to have “reached the end of its useful life” when it reaches this 70 percent of its original brightness point (see the TechZone article “Determining LED Rated Life: A Tricky Challenge”).

When it comes to efficacy, OLEDs again compare well with conventional light sources, but not so well with LEDs. Commercial panels like the OSRAM product above now yield about 20 lm/W, and some 30 lm/W (comparable to halogen bulbs) products are due to enter production. Incandescent bulbs struggle to yield more than 10 lm/W, while CFLs can output around 60 lm/W.

High brightness LEDs are again the superior device, with commercial products routinely featuring a luminous efficacy in excess of 110 lm/W. Cree’s XLamp XB-D series, for example, offers an efficacy of up to 136 lm/W (at 350 mA) and can produce up to 289 lm at 1 A. OSRAM’s latest generation of OSLON SSL offer an efficacy increase of 25 percent compared with the previous version. The devices can produce up to 116 lm/W (at 350 mA). And Seoul Semiconductor’s latest Acrich MJT Series can produce 129 lm/W (at 20 mA).

The inherent advantages of OLEDs over other lighting sources, including LEDs, are ensuring the technology is subject to significant development funds. While OLEDs lag behind LEDs in cost, longevity, and efficiency, there is plenty of scope for rapid improvement. It was only just over a decade ago that LEDs struggled to produce a luminous efficacy of 20 lm/W, the same as OLED’s output today.

If LEDs are a guide, OLEDs will rapidly get less expensive, last longer, and exhibit dramatically higher efficacy. There are already OLED panels on the lab benches of leading companies that produce 80 lm/W and industry observers predict 100 lm/W OLED lighting within three years. Panasonic, for example, has reported an 87 lm/W white OLED with a lifetime of over 100,000 hours.3

LEDs will continue to improve, as well. Cree has recently announced a device that outputs 276 lm/W (at a correlated color temperature of 4401 K and forward current of 350 mA4), and will likely stay ahead of the OLED curve (Figure 4) for some time yet.

Figure 4: While improvements in efficacy for traditional light sources have tailed off, LEDs and OLEDs show no sign of slowing. (Courtesy of Panasonic.)

LEDs and OLEDs are complementary rather than competing technologies. Predictions of the future are fraught with danger, but it’s not hard to imagine a world where LEDs are used for “working” lighting in the home, office, or commercial premises, while OLED panels are used for decorative domestic and architectural lighting in glorious topologies that are impossible to create today.

For more information on the lighting technologies and companies mentioned in this article, use the links provided to access product pages on the Digi-Key website. 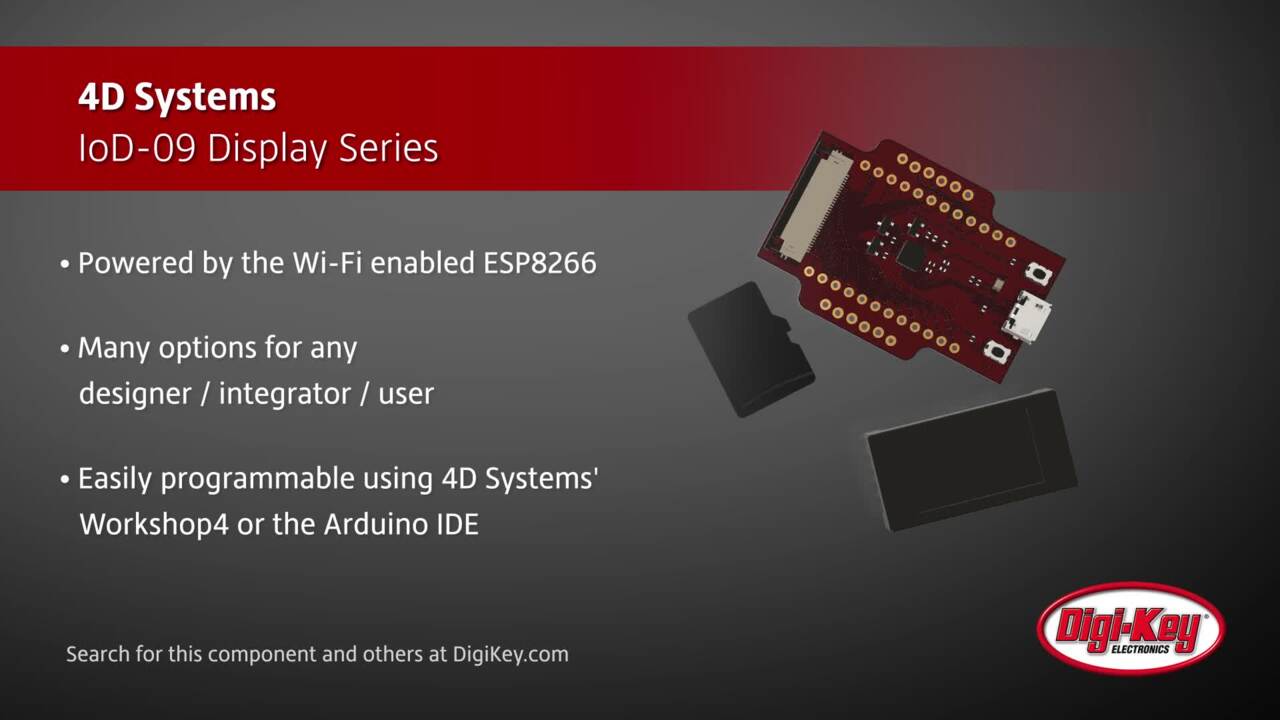