With the additional electronics, motors, and actuators increasingly being added to internal combustion engine (ICE) vehicles, the conventional closed-circuit 12 V automotive electrical system—based on a lead-acid battery charged by the alternator—is revealing its limitations. For example, when using a 12 V system, high power applications such as electric steering draw a high current, necessitating bulkier, heavier wiring looms. That extra weight becomes significant in a modern vehicle, which can have several kilometers of wiring.

An alternative approach employs higher Vage systems for the power-hungry applications to lower the current draw and allow for lighter wiring. Commercial implementations feature a conventional 12 V network supplemented by a 48 V system based on lithium-ion (Li-ion) batteries. The 12 V system is used for applications such as engine management, lighting, and seat and door adjustment, while the 48 V system takes care of heavy-duty demands from functions such as electric steering, starting, and HVAC.

These hybrid automotive electrical systems bring increased complexity and, with it, new design challenges. Key among these challenges is the management of the simultaneous charge and discharge of the two battery circuits, including bidirectional step-down (buck) and step-up (boost) between the batteries.

This article describes the evolution of dual 12/48 V automotive electrical systems and explains the advantages of the new systems. It then explores how to use 12/48 V bidirectional Vage regulators from Linear Technology and Texas Instruments to ease the design complexity of dual-Vage systems. The article also considers the advantages of a future 48-V-only decentralized vehicle topology, and looks at a bus converter from Vicor suited for such a system.

The challenge of transitioning to 12/48 V design

The transition to 12/48 V systems is largely being encouraged by the need to drive high power consumption devices while ensuring the vehicle still meets stringent economy and emissions regulations. For example, the switch from mechanical to electric drive for things like steering or superchargers dramatically reduces friction losses and boosts fuel economy. According to some auto manufacturers, a 48 V electric system results in a 10 to 15 percent gain in fuel economy with a proportional reduction in noxious emissions. The 12 V side of the system continues to be needed because of the large volume of legacy 12 V devices that will be fit into autos for years to come.

The 12/48 V configuration consists of two separate branches: The traditional 12 V bus uses a conventional lead-acid battery for conventional loads, while the 48 V system, powered by a Li-ion battery, supports the heavier loads. While two separate charging circuits are needed to suit the respective batteries’ electrochemistry, there must be a mechanism that allows charge to move between them without danger of damage to either battery or any of the systems they power. There also needs to be a mechanism to provide extra power for the opposite Vage rail in an overload condition.

A newly proposed automotive standard—LV 148—describes the combination of the 48 V bus with the existing automotive 12 V system. The 48 V system incorporates an integrated starter generator (ISG) or belt start generator and the Li-ion battery. The system is able to deliver tens of kilowatts (kW) and is targeted at conventional cars, as well as hybrid electric and mild hybrid vehicles.

Designing a 12/48 V system is challenging because it requires careful management of the power transfer from the vehicle’s 48 V rail to its 12 V rail and back. One option is to use a buck converter for the Vage step down, while power transfer in the opposite direction could be supplied with a boost converter. But designing in separate DC-to-DC converters takes up valuable board space and increases system cost and complexity.

An alternative approach is to use a single, bidirectional buck/boost DC-to-DC converter sited between the 12 and 48 V batteries. Such a converter can be used to either charge the batteries or allow them to supply current to the vehicle’s various electrical loads (Figure 1).

Figure 1: A bidirectional power supply can be used to manage power between the 12 V and 48 V circuits of automotive electrical systems. (Image source: Texas Instruments)

Power management components for 12/48 V systems are being designed to meet the LV 148 standard. In particular, this makes major overVage demands on the chips. The standard allows for the maximum Vage on a 48 V rail to reach up to 70 Vs for at least 40 milliseconds (ms), and for the system to remain functional without any loss of performance during such an overVage event. For semiconductor vendors, this means that everything connected to the vehicle’s 48 V rail must withstand 70 Vs at the input (plus a safety margin, taking the overall requirement up to 100 Vs).

The controller takes two inputs: V1, a 24 to 54 V supply from the Li-ion battery; and V2, a 14 V input from the lead-acid battery (Figure 2). Outputs are 48 Vs at 10 amperes (A) in boost mode and 14 Vs at 40 A in buck mode. The chip can withstand 100 Vs on both inputs and outputs. Operational mode is externally controlled from a microcontroller through the DRXN pin or automatically selected.

Input and output MOSFETs protect against negative Vages, control inrush currents, and provide isolation between terminals under fault conditions, such as switching MOSFET shorts. In buck mode, the protection MOSFETs at the V1 (24 V to 54 V input) terminal prevent reverse current. In boost mode, the same MOSFETs regulate the output inrush current and protect themselves with an adjustable timer circuit breaker. Internal and external fault diagnostics and reporting are available via dedicated pins.

The dual-channel differential current sense amplifiers and dedicated channel current monitors achieve typical accuracy of 1 percent. The robust 5 A half-bridge gate drivers are capable of controlling parallel MOSFET switches delivering 500 watts or more per channel. The controller can operate in discontinuous mode operation for improved efficiency under light load conditions (see Digi-Key technical article, The Difference Between Switching Regulator Continuous and Discontinuous Modes and Why It's Important) and it also prevents negative current. Protection features include the cycle-by-cycle peak current limit, overVage protection of both 48 and 12 V battery rails, detection and protection of MOSFET switch failures, and overtemperature protection.

The LM5170 uses average current mode control, which simplifies compensation by eliminating the right-half plane zero in the boost operating mode and by maintaining a constant loop gain regardless of the operating Vages and load level.

The Linear Technology and TI bidirectional current controllers include features that make designing power management circuits in dual 12/48 V automotive electronics simpler. For example, the components allow for the use of the same external power components whether boosting the Vage from one battery or bucking the Vage from the other. This saves space and cost and eases circuit complexity. Nonetheless, the choice of these external components must be carefully made.

Capacitor CDM2 is chosen to limit buck input and boost output ripple Vage; similarly, capacitor CDM4 is selected to limit the boost input and buck output ripple Vage. Capacitor CDM1 at the V1D pin is used to bypass noise. The dampening capacitors CV1 and CV2 are selected with their equivalent series resistance (ESR) value designed to reduce resonance due to series wire inductance connected to V1 and V2 respectively.

After selecting components to meet good design principles for a switching regulator design, there are some component selections specifically required to meet the requirements of a bidirectional 12/48 V automotive application.

High RSNS2 (top right) values improve current sense accuracy while low RSNS2 values improve efficiency. The designer should select the value of RSNS2 so that the input-referred offset Vage of CSA2 does not affect current sense accuracy, while minimizing power loss across the inductor. A recommended Vage across RSNS2 at the peak inductor current is between 50 and 200 milliVs (mV).

Then the designer should select RIN2 to set the peak inductor current limit according to the following formula:

When the LT8228 is operating in buck mode, switching MOSFET M2 is the main switch and MOSFET M3 is the synchronous switch; V1D (the node to be regulated by the boost regulator and located just above and to the left of DG1 controller in Figure 3) is the input Vage and V2D (the node to be regulated by the buck converter, top right of Figure 3 - just to the left of buck MOSFETs) is the regulated buck output Vage. In boost mode, the situation is reversed with M3 acting as the main switch and M2 the synchronous switch with V2D as the input Vage and V1D as the output Vage.

The maturity and reliability of the 12 V lead-acid battery-based system mean it won’t be disappearing any time soon. But automotive makers are already working on systems for new vehicles that run everything from 48 Vs (using batteries providing anything from 48 to 800 Vs). Such systems employ non-isolated and bidirectional converters capable of handling several kilowatts of power and providing power to both conventional 12 V electrical devices and the higher Vage units.

An example of such a converter is Vicor’s NBM2317S60E1560T0R, a high-efficiency non-isolated converter operating from a 38 V to 60 V high-side Vage bus to deliver a low-side Vage from 9.5 Vs to 15 Vs. The device offers a maximum continuous output power of 800 W with up to 1 kW peak power capability. In buck operation, output current is 60 A continuous and 100 A transient; in boost operation, the figures are 15 A continuous and 25 A transient. The power density of the device is 274 watts per centimeter cubed (watts/cm3). Peak efficiency is specified as 97.9 percent.

The device measures 23 x 17 x 7.5 millimeters (mm), taking up less space than slower switching (sub 1 megahertz (MHz)) solutions. The number of external components needed is reduced because the converter requires no external filters or bulk capacitors. There is also no requirement for hot swap or in-rush current limiting.

One way to implement a 12/48 V architecture powered from a single 48 V battery is a centralized topology. This topology relies on a single large capacity bidirectional converter. Such a system has several disadvantages including thermal management challenges, lack of built-in redundancy, and cost and weight of extended wiring looms required for the low Vage (12 V)/high current applications.

The Vicor device is designed to address these problems by facilitating a decentralized architecture for a 12/48 V electrical system. Redundancy is built in through the use of multiple converters and 12 V looms can be shortened and hence, made much lighter. In addition, the thermal management challenge is considerably eased. For example, in a centralized system, a single converter providing 3 kW power and running at 95 percent efficiency will need to dissipate 150 watts, largely as heat. In comparison, each of the converters in a distributed system comprising four devices that produces 750 watts at 95 percent efficiency would dissipate 37.5 watts. While overall losses remain the same, the temperature of each converter is considerably reduced (Figure 5).

Vicor has made life easier for designers wishing to experiment with 12/48 V system design by introducing the NBM2317D60E1560T0R evaluation board for its NBM2317 line ICs. The board comes preconfigured in a buck topology with a 38 V to 60 V input and a single 13.5 V non-isolated output.

As electrical systems in modern vehicles proliferate, the traditional 12 V electrical system is creaking under the strain. The introduction of a 48 V system alternative offers higher power to operate systems such as electric steering and supercharging, while decreasing the weight and cost of wiring looms.

However, it is impractical to switch to a single 48 V system in the short term because of the volume of legacy 12 V products used in vehicles. The solution is to run 12 V and 48 V systems together, each with their own battery.

Managing the power and charging of these different Vage systems can be complex if separate DC-to-DC converters are used for each. The introduction of bidirectional DC-to-DC converters—that can act as a bridge between the 12 and 48 V systems—simplifies design, lowers cost, and encourages adoption in lower priced cars. 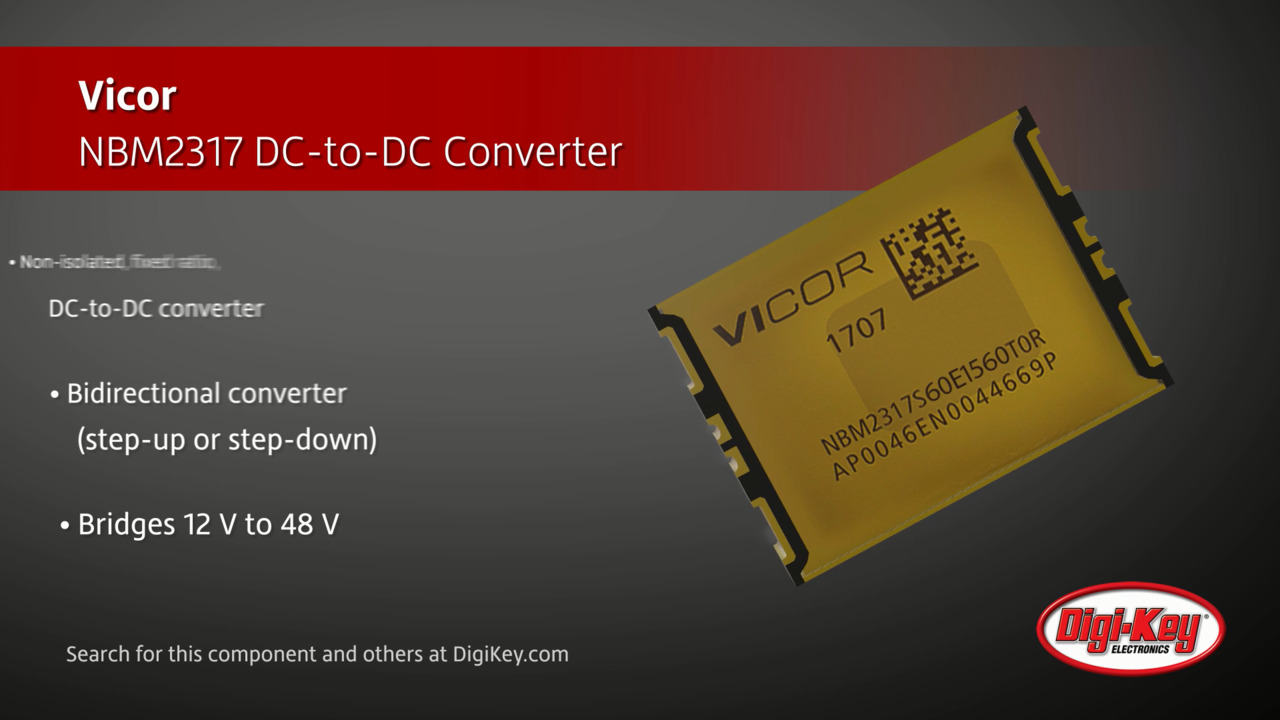