There are three common techniques for measuring current using an oscilloscope. The first is using a resistor (sometimes called a current shunt) in series with the current being measured. The second is to use a current transformer. The third is to use a current probe. Since all three methods require that the current being measured pass through the measurement sensor they are all somewhat invasive.

The current probe, because it lets users measure a conductor’s current without having to unsolder it, is the least invasive technique. However, users need to understand some fundamental principles of current probes to get the most out of the latest probe designs.

This article will describe the various current measurement methodologies before introducing current probes and how to use them effectively.

The idea is to get a reasonable voltage drop while at the same time not affecting the circuit’s performance. Also, the power rating of the shunt has to be sufficient for the current being measured. An example of a current shunt resistor is the Riedon RSA-10-100. This chassis-mounted resistor has a resistance of 0.01 Ω with a tolerance of ±0.25% and a power rating of 1 watt. The resistor power rating sets the maximum current at 10 amps, producing an output voltage of 100 millivolts. An oscilloscope is used to measure the voltage across the shunt. Most oscilloscopes have provisions to scale that voltage into an equivalent current (Figure 1).

Figure 1: The channel setup of a Teledyne LeCroy HDO4104 oscilloscope showing the rescale setup that allows vertical read out in Amperes based on the shunt resistor value (Image source: Digi-Key Electronics).

The input channel setup for a Teledyne LeCroy HDO4104 oscilloscope is typical of many instruments in that it allows the vertical data to be rescaled. The Rescale controls permit the user to specify the units, Amperes in this case, and the rescale factor in Units/Volt. In the case of the RSA-10-100, the ‘Units per Volt’ setting is the reciprocal of the resistance value, or 1/0.01 = 100. There is also provision to add or subtract an offset current, something that might be needed for an active sensor. Once the Rescale setup is entered, the vertical scaling of the scope input channel will read out directly in Amperes, including measurement parameters and cursor readings.

Shunt resistors respond to both AC and DC currents with bandwidths limited by the resistors internal inductance and capacitance.

A complement to standard flat current shunt resistor is the coaxial or impulse current shunt. These devices arrange the shunt resistor(s) into a cylindrical geometry to minimize their inductance. Voltage contacts are brought out to a coaxial connector of suitable bandwidth.

Coaxial current shunts are available with bandwidths up to 100’s of MHz dependent on the resistor value and the maximum current rating.

The size of the coaxial shunt is proportional to maximum current rating and they are much larger than conventional flat current shunts.

Magnetic sensing of current in a conductor is another possibility. The simplest magnetic based sensor is the current transformer (Figure 2).

Figure 2: The current transformer senses the current in a conductor passing through the opening in a ferrite core using a multi-turn secondary winding. (Image source: Digi-Key Electronics)

The conductor carrying the current being measured (IMeas) is passed through the center of a ferrite core forming the primary winding of a transformer. The current induces a magnetic flux in the core proportional to the current. A sense winding of N turns is used to sense the magnetic flux. The current induced in the secondary is proportional to the turns ratio (ratio of the number of turns in the primary to the number of turns in the secondary winding, 1/N in this case).

The secondary current is converted to a voltage by passing it through a resistor, most commonly the 50 W termination of the oscilloscope. The input channel Rescale setting is set to N/50 amps/volt if the 50 W termination is used. The current transformer only works for AC signals. It cannot be used to measure direct currents.

Current probes are designed to offer a convenient way of measuring current. They can be AC coupled, using current transformer technology or AC/DC coupled. In either case they include a split-core geometry that makes it easy to enclose the current carrying conductor without having to unsolder it.

The Teledyne LeCroy CP030 is a good example of an AC/DC current probe capable of measuring up to 30 amps with a bandwidth of 50 MHz (Figure 3).

The CP030 is built on a split ferrite core, which enables quick insertion of the conductor carrying the current being measured.

The output termination converts this current into a voltage. As the Hall effect sensor output decreases with increasing frequency, the feedback winding acts as a current transformer, accurately measuring the high-frequency components of the measured signal.

The sensitivity of the CP030 is 1 volt/amp. The probe communicates this to the oscilloscope using the ProBus interface. The scope automatically adjusts the scaling of the channel the probe is plugged into to read in Amperes (Figure 5).

Figure 5: The channel setup in a Teledyne LeCroy HDO 4104 oscilloscope with a CP030 connected. The probe is automatically recognized, as indicated in the Probe entry box. The correct scaling is automatically entered into the Units/V entry and the vertical units are set to Amperes. (Image source: Digi-Key Electronics)

In addition to sensing and scaling the probe output, the oscilloscope includes a dialog box with all the controls related to the probe (Figure 6).

Figure 6: The setup dialog box for the CP030 probe, showing the controls for degaussing and Auto-Zeroing the probe. (Image source: Digi-Key Electronics)

This includes the degaussing and Auto-Zero controls. Degaussing eliminates any residual flux in the probe’s core by applying a demagnetizing signal. Degaussing should be used before any critical measurement to insure the best accuracy. Auto-Zero control sets any offset of the probe’s output to zero volts when no current is present. Having these controls on the oscilloscope means that they do not take up any space in the probe body or interface box, making the probe smaller. The dialog box also identifies the probe and provides its salient specifications.

Common techniques to increase the usefulness of current probes

When measuring small currents, the sensitivity of a current probe can be increased by wrapping multiple turns through the primary (Figure 7A).

As in any transformer, the probe sensitivity will increase by the number of turns passing through the probe core. In the figure, there are four turns through the probe core increasing the sensitivity by a factor of four. This factor must be manually entered into the probe Rescale settings. Note also that the insertion impedance will increase by the square of the number of turns. In this instance the impedance will increase by a factor of sixteen. Since the measurement is intended for low current levels, the voltage drop across this impedance is generally low and should have a minimal effect on the measurement.

If multiple conductors are passed through the probe, the oscilloscope will read the net current (Figure 7B). This technique can be used to measure the differential current in two conductors. It can also be used to cancel a large offset current by passing a conductor with an equivalent DC current in the opposite direction. This can extend the range of the current probe.

Many manufacturers supply current probes intended for the general oscilloscope market that do not use proprietary interfaces. These probes include a power source and controls for degaussing and adjusting the probe DC offset. An example is the CP6990O-NA, an AC/DC 40 A, 1.5 MHz stand-alone current probe from Cal Test Electronics (Figure 8).

This current probe is battery powered and connects directly to an oscilloscope with the supplied BNC cable. The probe has dual sensitivity ranges, either 1 volt/amp or 100 millivolts/amp. The Rescale field on a Teledyne LeCroy HDO4104 would have 1 or 10 Units/Volt entered, respectively. The unit’s field should have “A” selected. The vertical scales for the selected channel will now be calibrated in Amperes.

Oscilloscopes can be used to make current measurements using current shunts, current transformers, or current probes. Regardless of the sensor used, the oscilloscope channel can be scaled to read directly in units of current.

The current probe is the easiest device to use due to its ease of connection. Current probes supplied by the oscilloscope manufacturer sense the probe and automatically scale the current data. 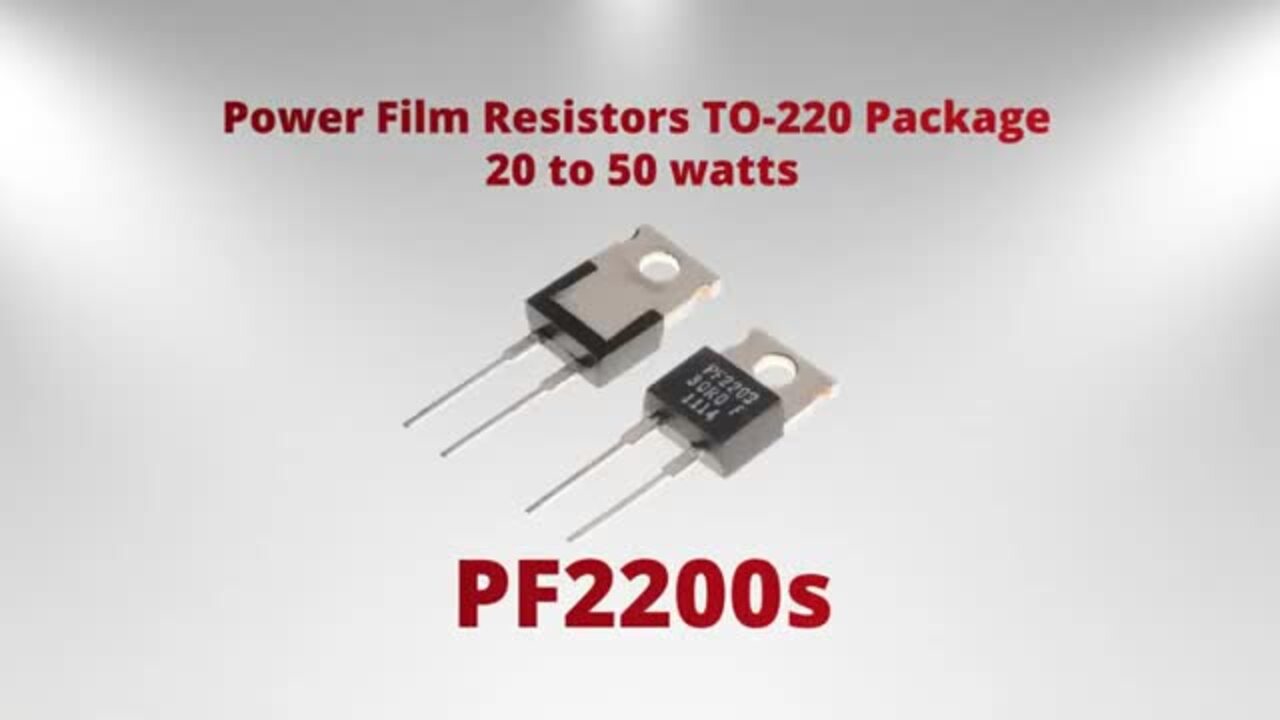 Riedon's Most Popular Resistors in 2020

Arthur (Art) Pini is a contributing author at Digi-Key Electronics. He has a Bachelor of Electrical Engineering degree from City College of New York and a Master of Electrical Engineering degree from the City University of New York. He has over 50 years experience in electronics and has worked in key engineering and marketing roles at Teledyne LeCroy, Summation, Wavetek, and Nicolet Scientific. He has interests in measurement technology and extensive experience with oscilloscopes, spectrum analyzers, arbitrary waveform generators, digitizers, and power meters.