Reducing Robot Risk: How to Design a Safe Industrial Environment

The increase in industrial automation (IA), and particularly the use of industrial robots, is increasing the chance of an unexpected interaction between a human operator and a piece of other mobile equipment or moving machine. The onus is on designers to implement appropriate and often overlapping safety precautions to avoid consequences ranging from interruptions in production to injury or even death.

While safety is paramount, designers must still design and keep an eye on both initial costs and total cost of ownership.

This article will discuss best practices in plant safety and review some of the techniques and products used to establish and maintain a safe industrial environment and their applications.

Factory safety affects everyone in the organization

Safety in an industrial plant is a multi-faceted topic that requires involvement from all levels of the organization, from the shop floor to the executive suite. Ideally, a safe factory is designed from the ground up, but many plant buildings predate the widespread adoption of automation, the use of industrial robots, and the rise of the Industrial Internet of Things (IIoT) technologies.

Numerous national and international safety standards apply to different types of industrial machinery, safety equipment, and production processes. Among these are:

Designers must take time to familiarize themselves with the applicable specifications before they begin.

The preferred approach in developing a safe factory environment has several layers. The process begins with a comprehensive identification, evaluation, and analysis of the hazards, and an assessment of their relative importance.

There are several ways to reduce the risk posed by the hazards thus identified. Examples include:

After the initial analysis, the next stage is to develop a Hazard Control Hierarchy that ranks these measures in order of effectiveness and preference for each risk. ISO 12100:2010 (Safety of machinery – General principles for design) is the primary standard addressing the concept and methodology of tiered risk reduction.

The preferred solution is to eliminate the risk completely or substitute a safer alternative that minimizes the opportunity for unexpected human-machine interactions (Figure 1). An example is installing an automated material handling system to replace a manual loading operation.

If that is not feasible, the next most desirable course of action is to add safeguarding devices that prevent a hazardous event from occurring.  If such a device is activated, it typically initiates an automatic operation without human input; a machine is shut down, or a robot is disabled until an operator performs a manual reset. Examples of such devices include light curtains, interlocks, and pressure mats.

Other options are less desirable because they require human action as part of hazard avoidance: these options include visual or audio alarms, enhanced safety training, and protective equipment such as face shields, ear plugs, or gloves.

For retrofitting existing work areas, active safeguarding devices have another advantage: speed of installation. They can be added without redesigning the work flow or training personnel in new safety procedures, both of which can take months to implement.

The modern industrial work cell uses a multilayer approach to safety: designers must combine active measures such as safety mats, light curtains, and lasers with visual and audible warning indicators (Figure 2). The desired result is that an operator receives warning of a potentially unsafe situation; if they then venture into harm’s way, several independent devices shut down operations before disaster can strike.

Figure 2: A variety of safety devices is used in an automated work cell so that if someone ventures into harm's way, several independent devices can shut down operations. (Image source: Digi-Key)

Increasingly, an industrial network links these devices; the data is used to track and log incidents, as well as identify areas for future improvement. A discussion of some of the main safety devices and their application follows.

A safety mat is a cost-effective means of preventing a human or wheeled machine from entering an unsafe area. Typically, a safety mat uses an open switch that closes when a specified minimum weight presses on the mat. The switch closure results in a signal to the mat controller that initiates a stop signal to the machine being guarded.

Omron Automation and Safety’s UM5-4836 is a good example: it employs two conductive plates made of 24 gauge steel that together form the switch (Figure 3). An activation force of 30 kilograms (66 lbs) closes the switch. The mat includes an integrated four-wire cable that allows a controller to monitor for fault conditions such as a permanently open connection or physical damage.

Figure 3: the Omron UM series safety mat system includes the mat, controller, and a variety of trim pieces to secure the mat to the floor. (Image source: Omron)

Multiple mats can be wired in series to form a safety zone around a machine. The safety zone combines with a mat safety controller such as Omron’s MC3, MC4, or MC6: the MC6 can accommodate up to six individual mat zones.

Dating back to the 1950s, safety mats have long been the standard form of area protection in the factory. Be aware, however, that as an electro-mechanical technology, safety mats are subject to physical, environmental, and operational abuse, and the contacts can wear out with long-term repeated use. Still, safety mats are widely used in modern highly automated factories.

A safety light curtain is a suitable choice if the designer needs to isolate a hazardous machine or cordon off an area behind an “invisible wall” (Figure 4). A light curtain consists of a set of photoelectric transmitters that project an array of synchronized, parallel infrared light beams to a matching receiver unit. When an opaque object interrupts one or more beams in the sensing field, the receiver detects the event, and the light curtain sends a stop signal to the guarded machine.

The transmitter module contains LEDs that emit sequenced pulses of infrared (IR) light. The pulses are modulated – pulsed at a specific frequency – and the corresponding phototransistors in the receiver are designed to detect only the designated pulse and frequency. This technique improves the rejection of external light sources.

Figure 4: A light curtain can discriminate between a workpiece and a human operator (a) by performing muting control for each beam axis. It can also include a blanking action (b), so permanent obstacles are ignored. (Image source: Panasonic Industrial Automation)

In an application such as a conveyer belt, the light curtain incorporates a muting function that causes the line to stop only when an unexpected object passes through it, but not when a product passes through.

If the muting transmitter/receiver pair detects the presence of a product on the conveyer belt (Figure 4a), it can disable a defined number of channels to prevent a false trigger. A human operator, however, can still interrupt one of the active channels and cause an alarm. When the muting system detects that the product has passed, it reenables the muted channels.

Additionally, a blanking function can disable channels (Figure 4b) that are always blocked, by a piece of equipment, for example.

The SF4B series of light curtains from Panasonic Industrial Automation includes multiple products optimized for different applications. The “H” series devices are intended to detect hand-sized objects, with a vertical spacing between beams of 20 mm (0.8”). For example, the SF4B-H28(V2) has 28 transmit/receive channels that form a curtain 500 millimeters (mm), or 21.7 inches (“) high. This product has an operating range from 0.3 meters (m) to 9 m.

In the last couple of decades, laser technology has also begun to help improve safety on the factory floor. A safety laser scanner can provide three-dimensional protection of an area, and offers the designer increased flexibility to tailor the system response by specifying different warning and safety bands, also known as zones, around the hazard (Figure 5).

Once an object or person is detected in the outer warning zone, the scanner sends a warning signal to an audible or visible indicator that notifies them of a potential hazard. When the person or object enters the inner safety field, the laser scanner sends a signal to stop the hazardous motion of the robot or machine. The zones are programmable and can be changed dynamically by an input to the safety scanner.

Safety laser scanners use time-of-flight technology. The transmitter emits a pulsed laser beam that is reflected by an intruding object and detected by the receiver. The time between transmission and reception is proportional to the distance between the scanner and the object.

An integrated rotating mirror deflects the pulsed laser beam and enables the unit to perform a fan shaped scan of the surrounding area. The real-time measurement data can be transmitted over a networked interface for further analysis if needed.

SICK’s S32B-2011BA safety laser scanner, for example, uses a laser diode to produce a near-infrared pulse with a wavelength of 905 nanometers (nm). This device is part of SICK’s S300 family and features a protective range of 2 m and a warning range of 8 m. Another S300 device, the S32B-3011BA, features an expanded protective range of 3 m.

The OS32C Area Scanner from Omron Automation and Safety features a monitoring field of up to 270˚ and includes two separate warning zones, plus a safety zone (Figure 6). The OS32C can communicate via the industrial EtherNet/IP protocol: it can be monitored by ODVA EtherNet/IP-compliant products such as programmable logic controllers (PLCs) or industrial human-machine interface (HMI) modules. A variety of data including system status, zone status, and measurement details can be transmitted.

Until recently, laser scanners have been considerably more expensive than safety mats. But lower cost laser safety scanners are becoming available, and the return on investment (ROI) for safety scanners compares well to older technologies from a total-cost-of-ownership (TCO) perspective. The TCO analysis particularly favors a laser scanner in a high traffic area where a safety mat might have to be periodically replaced.

Other safety components help to “connect the dots”

The main safety devices discussed above are used in conjunction with other safety components that might not be as technologically sophisticated, but play a vital role in plant safety. Among these are items such as emergency switches, door interlocks, light towers, and cable-pull actuators. Designers can find out more about these products on Digi-Key’s Safety Components page.

The key is to first prevent personnel and equipment from entering potentially dangerous areas. Safety mats, light curtains, and safety laser scanners play an important role in detecting intrusions and shutting down machines automatically without the necessity of human interaction. 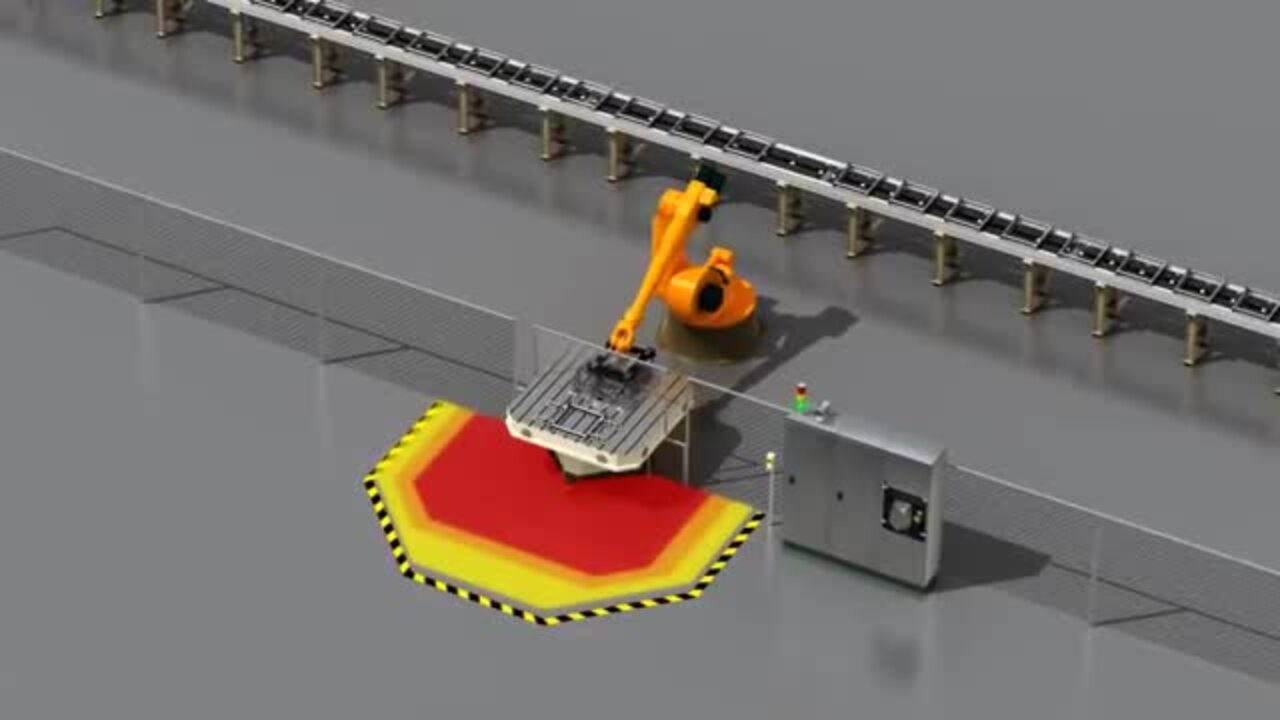