To meet growing desire for smart connected products, developers are turning increasingly to artificial intelligence (AI) methods such as machine learning (ML). However, developers often face a difficult hardware choice. They can base their designs on general purpose processors that are cost-effective but lack sufficient performance for complex algorithms, or they can use specialized solutions that deliver high performance but increase design cost and complexity.

Those are no longer the only options. This article describes a simpler, cost-effective alternative from Seeed Technology that lets developers deploy high-performance AI-based solutions using the familiar MicroPython programming language.

The success of ML algorithms has attracted attention from developers looking for more effective approaches for object detection and speech recognition in a wide range of applications. Among these algorithms, convolutional neural networks (CNNs) have demonstrated the kind of highly accurate recognition required in machine vision and hearing applications. As a result, CNNs and similar deep neural networks (DNNs) have found growing application in personal electronics, wearables, and Internet of Things (IoT) designs.

With the availability of the Seeed Technology Sipeed MAIX-I 114991684 module, developers have an alternative solution able to speed deployment of high-performance CNN inference solutions in smart products and edge computing devices.

The processor’s accelerators and integrated functionality support a range of requirements for typical smart product designs. For example, the audio processor unit (APU) supports up to eight microphones and includes its own dedicated 512 point FFT accelerator. Using these APU capabilities alone, developers can efficiently use microphone arrays to implement audio beamforming directional pickup used in speech interfaces for smart products. For speech interface capabilities such as key phrase wakeup, developers can use pre-processed audio output from the APU to drive the processor’s integrated CNN accelerator.

For all its capabilities, the most distinguishing feature of the Sipeed MAIX-I module lies in the CNN accelerator integrated in the module’s dual-core processor. Designed to speed processing of the individual kernel functions underlying CNNs, the neural network processor, here referred to as the “KPU” (kernel processing unit), provides hardware implementations of convolution, batch normalization, activation, and pooling kernel functions that comprise the individual layers of CNN models (see, “Get Started with Machine Learning Using Readily Available Hardware and Software”).

With these capabilities, developers can implement low-power designs that use CNNs to recognize speech activation phrases in audio interfaces or detect and classify objects in vision-based applications. In fact, the KPU can use the processor’s integrated SRAM to perform real-time inference using fixed-point CNN inference models as large as 5.9 Mbytes, or pre-quantized floating-point models as large as 11.8 Mbytes. In machine vision applications, for example, the KPU performs inference at better than 30 frames per second using the type of relatively small image frames used for face or object detection in smart products. For non-real-time applications, developers can use external flash to handle model sizes, limited only by flash capacity.

Internally, the KPU executes inference models using a first-in, first-out (FIFO) buffer to sequentially process each layer of a typical CNN model (Figure 2, top). For each layer, the KPU reads model parameters and data from its on-chip SRAM or external flash and executes that layer’s kernel function using the associated accelerated kernel function (Figure 2, bottom). Built into this layer processing pipeline, a callback mechanism allows developers to execute their own routines as KPU hardware completes each processing sequence.

The KPU abstracts the complexity of CNN algorithm execution behind its dedicated hardware. For developers, Seeed eases the complexity of CNN-based development with a combination of hardware offerings and software packages. Along with the MAIX-I module, developers can quickly evaluate and develop MAIX-I-based designs using Seeed board-level products that provide increasing functionality.

For prototype development, the Seeed 102991150 Bit evaluation board mounts a MAIX-I module on a board designed specifically for breadboarding. The Seeed Technology 110991190 MAIX-I Bit kit combines the Bit evaluation board, a 2.4 inch display, an OV2640 camera, and a pair of headers for connecting the Bit board to a breadboard.

For development of more complex applications, the Seeed 110991191 Sipeed MAIX Go board kit combines the MAIX-I module with an STMicroelectronics STM32F103C8 microcontroller, a camera, an I2S microphone, a speaker, lithium battery management, a MicroSD slot, and multiple interface connectors (Figure 3). By attaching the included 2.8 inch LCD to the back of the board, developers can effectively use the kit as the platform for an AI-driven digital video system.

Figure 3: One of a series of Seeed Technology MAIX boards, the Sipeed MAIX Go board combines the MAIX-I module with an STMicroelectronics STM32F103C8 microcontroller, a camera, a display, and multiple interfaces to provide a standalone imaging system for object recognition. (Image source: Seeed Technology)

The boards provide a standalone solution for many smart product requirements, and their support for MicroPython makes them easy to use. Using the combination of the Seeed Sipeed boards and MicroPython, developers can take advantage of a simpler approach for developing AI based smart products.

MicroPython was created to provide an optimized subset of the Python programming language for resource-constrained microcontrollers. With its direct support for hardware access, MicroPython brings the relative simplicity of Python based development to embedded system software development.

Instead of C libraries, developers use the familiar Python import mechanism to load required libraries. For example, developers simply import the MicroPython machine module to gain access to a microcontroller’s I2C interface, timers, and more. For designs using image sensors, developers can capture an image by importing the sensor module and calling sensor.snapshot(), which returns a frame from the image sensor.

Developers can use MaixPy and the KPU module to easily deploy a CNN inference. In fact, the Seeed MaixHub model library provides a number of pretrained CNN models to help developers get started with the MAIX-I module. To download these models, developers need to provide a machine ID available by running an ID generator utility on the MAIX board.

For example, using the Seeed Sipeed MAIX Go kit with the LCD attached, developers can load a pretrained model for face detection. Performing inference with the model requires only a few lines of Python code (Listing 1).

The pretrained model implements a type of CNN called a Yolo (you only look once) model, which speeds inference by using an entire image during training and inference rather than using a series of sliding windows underlying earlier CNN algorithms. Further optimizations of Yolo are embodied in the “Tiny Yolo2” model provided in the MaixHub model library. The result is a high-performance model that allows real-time face detection on the MAIX Go (Figure 4).

Of course, inference is only the deployment stage of the complex DNN model development process, and the apparent simplicity of this example can mask the challenges involved in implementing an effective model.

To develop a custom model, developers must acquire a sufficiently large set of samples for model training. For training developers use a deep-learning framework such as TensorFlow to configure a model and perform training using the training data.

Although those steps can be deceptively taxing, the MAIX-I ecosystem makes inference deployment relatively straightforward.

Seeed provides converters that let developers convert models developed in TensorFlow, Keras, or Darknet to the KPU’s special kmodel format. As with pretrained models downloaded from the MaixHub model library, developers can upload their custom models to the MAIX-I module and evaluate their performance with MicroPython as noted above.

The rapid acceptance of image and speech-based interfaces for smart products continues to drive interest in using machine learning algorithms in the resource-constrained designs underlying those products. In the past, developers found few effective options for solutions that are simple to implement and powerful enough to provide real-time machine learning functionality.

As shown, using the MAIX-I module and associated boards from Seeed Technology, developers can rapidly deploy inference models on a hardware platform capable of delivering real-time recognition of speech or objects from audio or video streaming data. 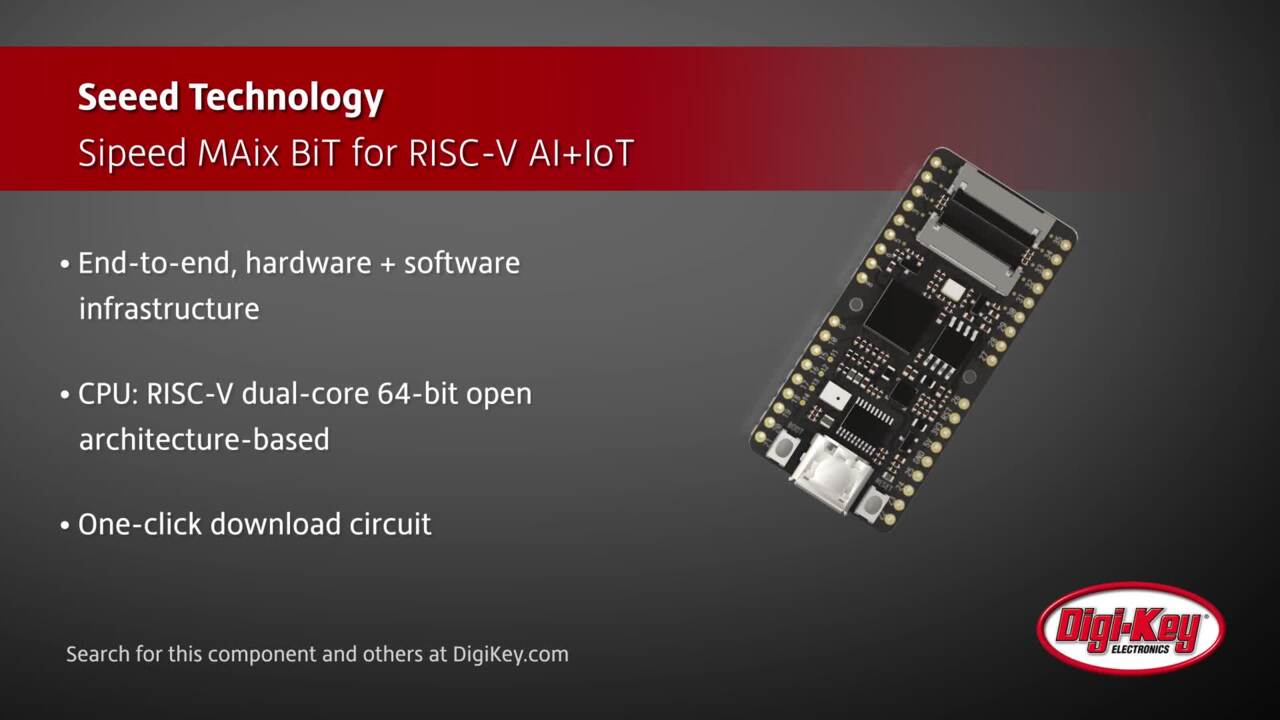 Sipeed MAIX for RISC-V The purpose of this presentation is to provide an overview of the Sipeed MAIX series products. The tutorial will give an in-depth look at key features and application scenarios. It will also instruct users on how to get started, as well as discussing the benefits of developing with Sipeed MAIX.