Consumer product designers must meet a range of safety-related requirements in addition to many functional and performance objectives, as well as efficiency and electromagnetic interference (EMI) mandates. These regulatory demands are complex, but a new standard—the IEC 62368-1 safety standard for information and communication technology (ICT) and audio/video (A/V) equipment—will help designers, but only if they understand its purpose and requirements.

As of this writing, there are two standards in widespread use that currently cover these areas: IEC 60950‑1, Information technology equipment – Safety; and IEC 60065, Audio, video and similar electronic apparatus ‑ Safety requirements. On December 20, 2020, these will be withdrawn and superseded by the single IEC 62368-1 standard.

The new standard does more than just eliminate differences and overlaps between the two product classes of the older standards. It transforms the safety perspective from “incident based” to a “hazard based” assessment, with a corresponding shift in requirements to accommodate existing technologies, but without restricting emerging advances.

This article discusses the role and highlights of IEC 62368-1 and its impact on designs. It then looks at functions and subsystems—specifically, power supplies—that play a major role in meeting the new standard. Finally, it introduces power supply solutions from CUI Inc. that meet its mandates so that engineers can get products approved more easily and to market more quickly.

Just a few decades ago there were clear differences between A/V products and information technology (IT), i.e., computer products. As a result, each of these traditional product classes had its own associated safety standard. However, advances and changes in technology and products have blurred the boundary between these two groups and their overlap grew significantly. As a result, a new, joint safety standard was needed to replace the individual ones.

The original version of IEC 62368-1 was developed by the International Electrotechnical Commission (IEC), one of the oldest standards-making bodies in the world. To do so, the IEC created Technical Committee (TC) 108, made up of experts, academics, and government officials, whose mandate was to develop a new standard that would replace IEC 60065 and IEC 60950-1 rather than just revise and update each individual standard (Figure 1). The resultant TC 108-developed standard was then formally adopted by the IEC, and many countries and regions “harmonized” with this standard, including the US.

Figure 1: IEC 62368-1 is an entirely new safety standard with a fresh approach covering a wide range of consumer and office products, but it does have some evolutionary history and context. (Image source: Power Systems Design)

The many product classes covered by IEC 62368-1 include, but are not limited to, the following:

IEC 62368-1 is not just a straightforward revision that updates and merges its two predecessors. Instead, it uses a hazard-based approach, formally called Hazard-Based Safety Engineering (HBSE), to cover safety issues related to both electronic equipment and IT/communications technology. Rather than looking at and defining detailed descriptions of safety requirements, the new approach emphasizes the risks that may occur, and at the same time gives manufacturers latitude in deciding how to design the protection against these risks. It therefore places more emphasis on evaluating a product for safety during the design stage. Using HBSE principles, IEC 62368-1 has these attributes:

Note that there is an important but temporary provision which enables companies to continue using their inventory of 60950-1 or 60065 parts in products certified to 62368-1, in effect “grandfathering” that inventory under certain circumstances and geographies. Specifically, Sub-clause 4.1.1 states: “Components & subassemblies that comply with IEC 60950-1 or IEC 60065 are acceptable as part of equipment covered by this standard without further evaluation other than to give consideration to the appropriate use of the component or subassembly in the end-product.” For a listed power supply, for example, this “consideration” can be as simple as ensuring the product is only used within its established electrical ratings.

HBSE: What it means

HBSE requires product manufacturers to demonstrate that known hazards have been considered and that the product has been designed to be safe to use in the expected context. In other words, rather than just saying, “You need to protect the user against this specific situation such as a known high voltage point that may be possibly exposed,” it instead says, “You need to assess the various hazards and deal with them appropriately, based on each hazard type and level.”

In doing so, it shifts the emphasis away from having manufacturers just show that the prescribed specifications have been met. Note that it does not require risk analysis, while other standards still do, such as IEC 60601-1 - Medical electrical equipment - Part 1-2: General requirements for basic safety and essential performance - Collateral Standard: Electromagnetic disturbances - Requirements and tests.

HBSE sets the objective of protecting equipment users by requiring manufacturers to identify any potentially hazardous energy sources along with the mechanisms by which that energy could transfer to a user. Then, they must propose and implement appropriate ways of preventing those transfers from happening—under both normal operation and fault conditions. The safeguards are put in place to protect against pain or injury caused directly by electrical energy (electric shock) or thermal burn injury, and/or to prevent electrically caused fires that could result in pain, injury, death, or property damage. Finally, HBSE also assesses the effectiveness of the safeguards.

Figure 2: The strategy of IEC 62368-1 is to identify hazardous energy sources and their possible paths to the user, and then provide safeguards against that energy path and flow. (Image source: InComplianceMag.com)

IEC 62368-1 also requires the manufacturer to consider the safeguard levels needed with respect to different types of users and energy sources, with three categories for each. For users, these three are “Skilled Person,” “Instructed Person,” and “Ordinary Person.” Energy sources are classified according to a table, with a simplified version shown in Figure 3.

Figure 3: IEC 62368-1 recognizes three danger ratings for energy sources, and then defines to what extent, if any, safeguards must be provided for each. (Image source: CUI)

The two gradations of user level and energy source then combine in a matrix (Figure 4).

Figure 4: To establish the level and type of safeguard that is needed for each energy source, the IEC 62368-1 standard combines energy source risk with user skill level and expertise. (Image source: SGS SA)

Users are at less risk as they move down the rows from ordinary person to skilled person, while energy sources become more dangerous as the energy class increases, moving across rows left to right. So, under the standard, an ordinary person using a Class 3 product (Energy Source 3, or ES3) would require an additional or reinforced safeguard, such as double insulation or a special shield, while a skilled person using an ES3 product would not require the same level of protection.

The safeguards are divided into two groups—approaches and levels—where “approaches” specify the method(s) by which the safeguard functions, while “levels” characterize the strength of the safeguard (Figure 5).

Figure 5: IEC 62368-1 identifies the suitable level of safeguard needed and then analyzes the approaches to implementation. (Image source: SGS SA)

Complicating the situation, equipment must comply with either the voltage limit or current limit specified in the applicable energy class but does not have to comply with both. Further, the limits as defined by the standards also vary according to normal or abnormal operation, or a single fault condition; there are even sub-sections that detail the limits on pulsed waveforms and their off times (Figure 6 and Figure 7).

Figure 6: Since electrical fires are caused by a combination of power and time, the IEC 62368-1 standard looks at the relationship between those two key parameters. (Image source: CUI)

What should a design engineer do?

Designers who think they understand the new standard and thus can easily comply with it fit into one of two groups:

The safeguard possibilities to consider include, but are not limited to, protective earthing (true Earth “grounding”), electrical enclosures, fire-resistant enclosures, and insulation. There are also installed safeguards such as bonding to an external earth and instructional safeguards, including safety marking. Finally, there are precautionary safeguards to be designed in for cases where ordinary users are instructed by skilled persons, and even so-called “skills based” safeguards that allow for reliance on the ability of a skilled practitioner to protect themselves against the hazards presented by Class 2 and Class 3 energy sources.

First, focus on the supply

The first question a designer must ask is: What is the primary source of the energy that puts this design into the risk area? For many of the products covered by this standard, the answer is obvious: it’s the AC power supply. For this reason, if a standard-compliant supply is selected, and then properly deployed, much of the compliance problem goes away and the design challenge is greatly reduced.

Fortunately, supply vendors such as CUI have been studying and analyzing the new standard in preparation for its December 2020 deadline, and are already offering a range of AC supplies that exceed the requirements. These supplies range from relatively low power units (under 10 watts), to mid-range units, and even to larger supplies in triple-digit wattages. Three examples illustrate the range and capability of these supplies.

Figure 10: For higher-power situations where a wall mount adapter is not appropriate or desired, the external SDI120-12-U-P51 AC/DC desktop adapter is available; the appropriate AC power cord is chosen separately. (Image source: CUI)

The IEC/UL IEC-62368-1 standard for consumer and related products goes into effect with a firm date of December 2020. It is a complicated standard and employs a hazards-based approach assessing potential safety issues and safeguarding against them, which is very different compared to previous standards. By starting with selection of an AC/DC supply that exceeds this standard’s mandates, the task of the design engineering team is greatly simplified and final product approval risk is minimized. 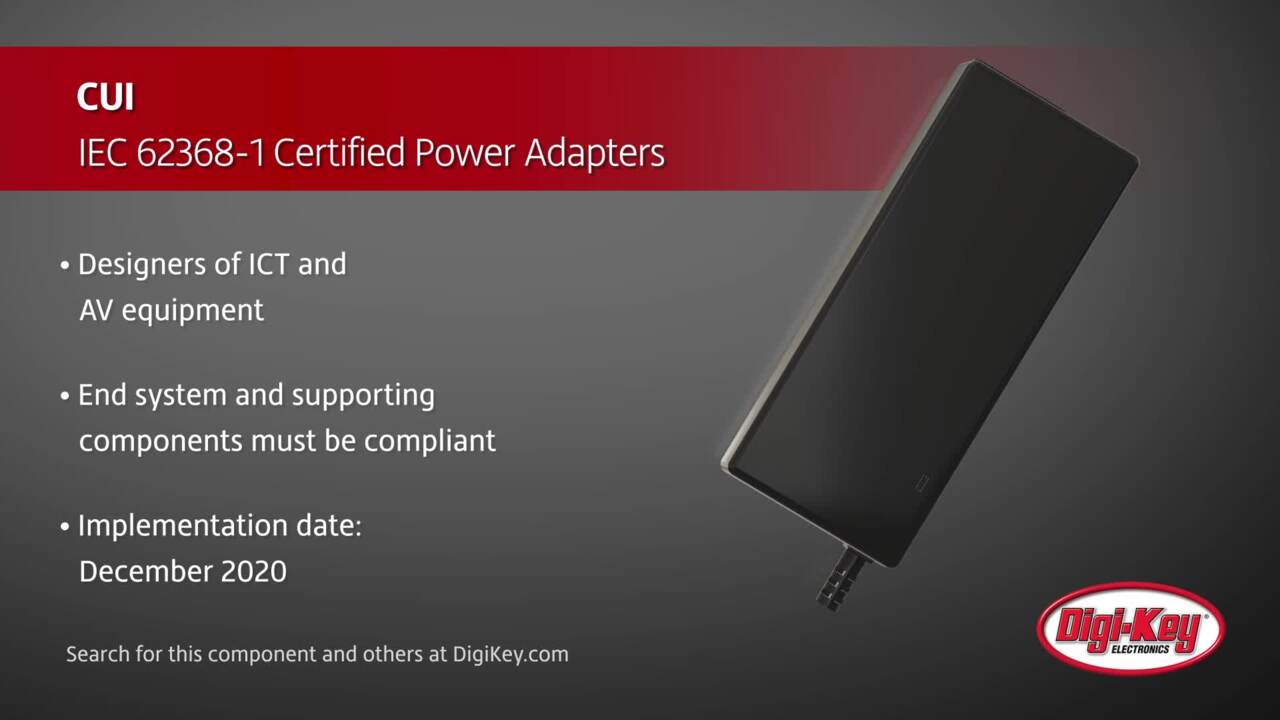