Temperature sensors are used in diverse applications such as food processing, HVAC environmental control, medical devices, chemical handling and automotive under the hood monitoring (e.g., coolant, air intake, cylinder head temperatures, etc.). Temperature sensors tend to measure heat to ensure that a process is either; staying within a certain range, providing safe use of that application, or meeting a mandatory condition when dealing with extreme heat, hazards, or inaccessible measuring points.

A thermocouple (TC) is a pair of junctions that are formed from two different and dissimilar metals. One junction represents a reference temperature and the other junction is the temperature to be measured. They work when a temperature difference causes a voltage (See beck effect) that is temperature dependent, and that voltage is, in turn, converted into a temperature reading. TCs are used because they are inexpensive, rugged, and reliable, do not require a battery, and can be used over a wide temperature range. Thermocouples can achieve good performance up to 2,750°C and can even be used for short periods at temperatures up to 3,000°C and as low as –250°C.

Strengths and challenges of thermocouples include: Thermistors

As an example of NTC thermistors, we will examine the GE Type MA series thermistor assemblies designed for intermittent or continual patient temperature monitoring. This application demands repeatability and fast response, especially when used with the care of infants and during general anesthesia.

The MA300 (Figure 1) makes routine continuous patient temperature monitoring feasible by using the convenience of the patient’s skin site as an indicator of body temperature. The stainless steel housing used is suitable for both reusable and disposable applications, while maintaining maximum patient comfort. Nominal resistance values of 2,252, 3,000, 5,000, and 10,000 Ω at 25°C are available

Resistance temperature detectors (RTDs) are temperature sensors with a resistor that changes resistive value simultaneously with temperature changes. Accurate and known for repeatability and stability, RTDs can be used with a wide temperature range from -50°C to 500°C for thin film and -200°C to 850°C for the wire-wound variety.

Thin-film RTD elements have a thin layer of platinum on a substrate. A pattern is created that provides an electrical circuit that is trimmed to give a specific resistance. Lead wires are attached, and the assembly is coated to protect both the film and connections. In comparison, wire-wound elements are either coils of wire packaged in a ceramic or glass tube, or they can be wound around glass or ceramic material.

An RTD example is Honewell’s TD Series used for such applications as HVAC — room, duct and refrigerant temperature, motors for overload protection, and automotive — air or oil temperature. Within the TD Series, the TD4A liquid temperature sensor is a two- terminal threaded anodized aluminum housing. The environmentally sealed liquid temperature sensors are designed for simplicity of installation, such as in the side of a truck, but are not designed for total immersion. Typical response time (for one time constant) is four minutes in still air and 15 seconds in still water.

RTDs have a better accuracy than thermocouples as well as good interchangeability. They are also stable over the long term. With such high-temperature capabilities, they are used often in industrial settings. Stability is improved when RTDs are made of platinum, which is not affected by corrosion or oxidation.

Infrared sensors are used to measure surface temperatures ranging from -70 to 1,000°C. They convert thermal energy sent from an object in a wavelength range of 0.7 to 20 um into an electrical signal that converts the signal for display in units of temperature after compensating for any ambient temperature.

These sensors are used to measure temperature when: When selecting an infrared option, critical considerations include field of view (angle of vision), emissivity (ratio of energy radiated by an object to the energy emitted by a perfect radiator at the same temperature), spectral response, temperature range, and mounting.

A recently announced product, the Texas Instruments TMP006, (Figure 3) is an infrared thermopile sensor in a chip-scale package. It is contactless and uses a thermopile to absorb the infrared energy emitted from the object being measured and uses the corresponding change in thermopile voltage to determine the object temperature.

Infrared sensor voltage range is specified from –40° to 125°C to enable use in a wide range of applications. Low power consumption along with low operating voltage makes the part suitable for battery-powered applications. The low package height of the chip-scale format enables standard high volume assembly methods, and can be useful where limited spacing to the object being measured is available.

The use of either contact or noncontact sensors requires basic assumptions and inferences when used to measure temperature. So it is important to read the data sheets carefully and make sure you have an understanding of influencing factors so you will be confident that the actual temperature is the same as the indicated temperature. 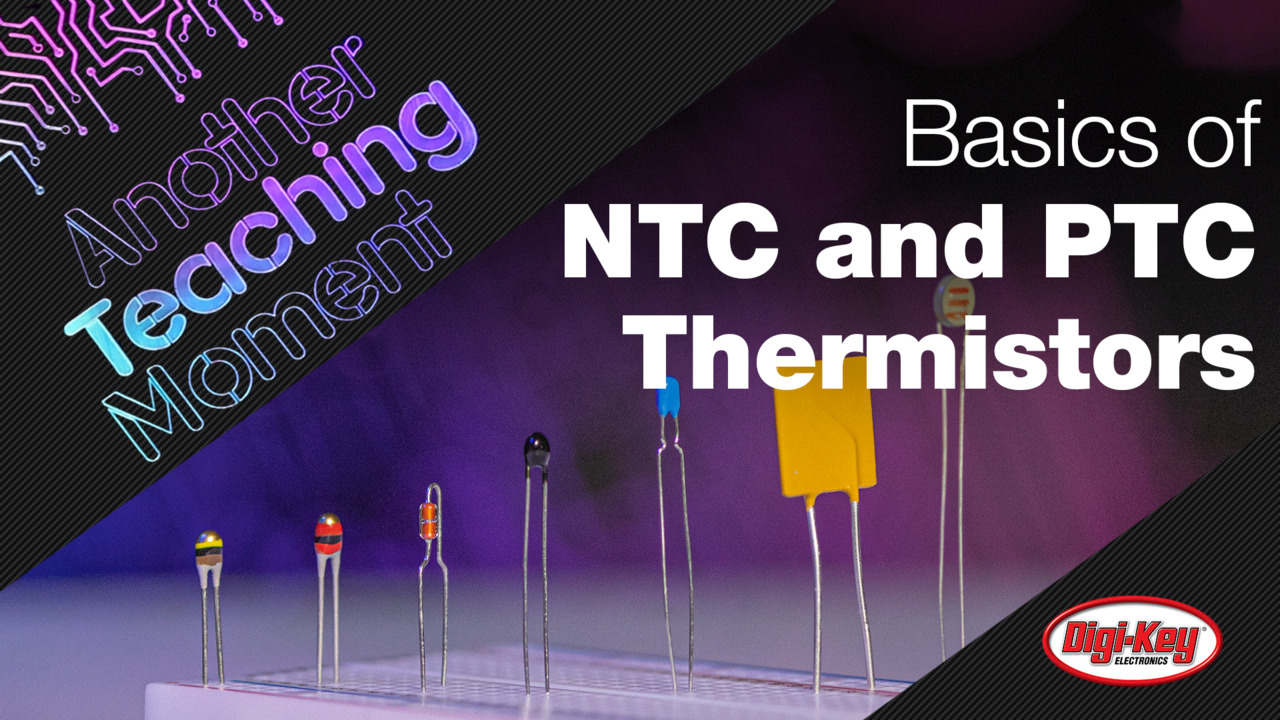 Basics of NTC and PTC Thermistors - Another Teaching Moment