Touchscreen user interfaces are becoming ubiquitous because of their clear advantages over mechanical interfaces. For consumers the interface is slick and intuitive, and for industrial users a sealed display avoids problems with dirt and moisture ingress. But there are downsides for both sets of users. For example, consumers may miss the convenience and satisfaction that comes from the click of a mechanical switch, while industrial users can struggle to confirm a button press if operating the touchscreen with a gloved hand.

Haptic feedback, whereby vibration indicates button operation, has been used to overcome the lack of feel from touchscreens, but existing solutions tend to use bulky and complex mechanical systems. These include eccentric rotating mass (ERM) vibration motors and linear resonant actuators (LRAs). Piezoelectric haptic feedback offers a more compact and flexible alternative. Until recently, however, its high operating voltages made it difficult to use in low power consumption applications - a crucial requirement for battery-powered end products.

However, advances in piezoelectric “high definition” haptic solutions not only address the power consumption concerns, but also bring other advantages to haptic interface design, such as a compact, low profile form factor; high force feedback; and fast response time.

This article briefly explores the advantages of new piezoelectric haptic actuators over ERMs and LRAs before introducing a new generation of devices based on multilayer structures and bipolar driving modes that—together with efficient and dedicated drivers—address previous power consumption concerns. The article then shows how an engineer can take advantage of these actuators and drivers in their next touchscreen haptic feedback product using haptic examples from TDK and drivers from Boréas Technologies and Texas Instruments (TI).

Designers looking to add haptic feedback to their touchscreen interface have three options to choose from: ERMs, LRAs, and piezoelectric actuators. All three work by applying the same basic principle, whereby a microcontroller supervises operation and a driver controls an actuator to generate vibration (Figure 1). The differences lie in how that vibration is created: the ERM uses an off-center rotating weight, the LRA uses a magnetic weight suspended by coil springs, and the piezoelectric device relies on the (reverse) piezoelectric effect which causes a change in the dimensions of a crystal or ceramic object when subject to an electric field.

Figure 1: Haptic touchscreen systems comprise a microcontroller, driver, and actuator. In this example the actuator is a piezoelectric device, but ERMs and LRAs are popular alternatives. (Image source: Boréas Technologies)

ERMs and LRAs have proven popular for portable designs primarily because they offer a low voltage (approximately 3 volts) option and require a simple driver design. In contrast, conventional piezoelectric devices require much higher voltages (up to 200 volts) to generate sufficient mechanical deformation for a good consumer experience. These high voltages are needed because conventional piezoelectric haptic driver technology is typically based on scaled-down audio amplifier technology, rather than having been designed from the ground up with low power in mind. An additional design challenge has been the lack of dedicated low-power haptic actuator drivers, forcing designers to turn to less efficient solutions.

However, a key advantage of piezoelectric solutions is that they support high definition haptics that enhance feedback beyond simple monotone vibration. For example, piezoelectric actuators can produce vibrations that vary in frequency and amplitude and can be used to signify different outcomes from presses on a single button (Figure 2).

Figure 2: Piezoelectric haptic actuators enable a range of vibrations that can be used to indicate different outcomes from activating a single button. (Image source: Boréas Technologies)

Table 1 summarizes the performance of each of the haptic feedback solutions and demonstrates that piezoelectric solutions are the only choice for high definition applications because they offer the required combination of bandwidth, feedback force and sensitivity, and latency.

Table 1: Comparison of operational characteristics of haptic feedback solutions. Piezoelectric devices offer the good acceleration (measured in ‘g’ where 1 g is the acceleration due to gravity at the Earth’s surface (9.81 m/s2)), displacement and response time, and custom waveforms required for high definition haptic feedback. (Image source: Digi-Key, via author)

Recent product introductions for both piezoelectric actuators and efficient, dedicated drivers have made the technologies a much better solution for battery-powered products. For example, recently introduced piezoelectric haptic products such as TDK’s PowerHap B54102H1020A001 (12.7 square millimeters (mm2) area) and B54101H1020A001 (26 mm2) are less than 2.5 mm high and use a multilayer structure instead of the single layer employed by devices based on audio amplifier technology. This multilayer structure eases the demands on the driver to some extent by lowering the driving voltage (to between 60 and 120 volts).

Each layer of TDK’s multilayered product only expands a small amount in the ‘z’ direction due to the reverse piezoelectric effect. However, because the piezoelectric device must maintain a constant volume, the layers simultaneously contract in the ‘x’ and ‘y’ dimension.

The TDK product mechanically amplifies this contraction using a pair of cymbals on each end of the piezoelectric device to increase z-axis movement by a factor of 15, achieving a displacement of between 35 and 65 micrometers (µm) depending on the model (Figure 3). Under a load of 100 grams (g) (unipolar operation, single pulse sine wave, 200 Hz) the larger TDK actuator achieves an acceleration of 30 g peak to peak after just 1 millisecond (ms). The 1 to 1000 hertz (Hz) frequency range enables designers to custom develop high definition haptic feedback profiles.

The Boréas Technologies’ IC is a single-chip piezo actuator driver that incorporates energy recovery technology and is capable of generating multiple vibration signals. The chip can drive actuators with up to 190 voltspk-pk from a 3 to 5.5 volt supply. The BOS1901 uses a high-speed serial peripheral interface (SPI) and all settings are adjustable through the digital front-end. Its typical start-up time of less than 300 microseconds (μs) translates to low latency.

The TI chip is a piezoelectric haptic driver with an integrated 105 volt boost switch and digital front-end capable of driving both high and low voltage actuators. The digital front-end relieves the microprocessor of the burden of pulse width modulation (PWM) generation or the need for additional analog channel requirements in the host system. The chip includes dedicated memory to store and recall waveforms, as well as an advanced waveform synthesizer. A typical start-up time of 2 ms limits latency, and thermal overload protection prevents the device from being damaged if overdriven.

Both the Boréas and TI chips are designed to operate in a touch-enabled system that already includes an application processor. The processor triggers the execution of the haptic feedback via an SPI. Alternatively, the designer can use an analog input to trigger haptic effects (Figure 5).

Because of the level of integration of the latest drivers, the design of touchscreen systems with piezoelectric haptic feedback has been made easier, but some component choices are important for optimizing the performance of the design. For example, the boost voltage (BST) should be 5 volts greater than the peak voltage to which the piezo actuator will be subjected. This allows for a degree of amplifier overhead and is set using the resistor divider network R1/R2 shown in Figure 5.

The choice of inductor is important to ensure best driver performance. In the case of the TI chip, recommended inductances range from 3.3 to 22 microhenries (μH). The trade-off is whether to choose a larger inductance to lower the switching losses of the boost converter or a smaller inductance to maximize its output current.

The key electrical specifications for the piezo haptic actuator from the driver perspective are voltage rating and capacitance. At the TI driver’s maximum frequency of 500 Hz, for example, the device is optimized to drive up to 50 nanofarads (nF) at 200 voltspk-to-pk (the driver’s highest voltage swing capability). The chip can drive larger capacitances if the programmed boost voltage is lowered and/or the user limits the input frequency range to 300 Hz, for example.

Another important choice of component is the boost capacitor (C(BST)). The capacitor must have a voltage rating at least that of the boost voltage and preferably higher. For example, a 250 volt rated 100 nF capacitor of the X5R or X7R type is recommended when running at the TI chip’s maximum boost voltage of 105 volts. C(BST) must have a minimum working capacitance of at least 50 nF. For V(BST) from 30 to 80 volts, a 100 volt rated, 100 nF capacitor is acceptable and for V(BST) less than 30 volts, a 50 volt, 0.22 microfarad (μF) capacitor is recommended.

The use of a bulk capacitor (CBULK) placed next to the inductor is recommended due to the switch pin current requirements. A ceramic capacitor of the X5R or X7R type with capacitance of at least 1 μF is recommended.

For engineers wishing to experiment with the capabilities of TDK’s piezoelectric haptic actuators ahead of committing to hardware, the company offers the single-channel Z63000Z2910Z 1Z 1 PowerHap evaluation kit. The kit comprises a base board, a step-up converter, an output driver board, and a microcontroller board.

The kit comes with configuration software that runs on a PC using Windows 7 (or later). Once the software has been loaded, the kit is connected to the PC via a USB cable and powered by applying 12 volts (DC). The software then provides an interface to configure the haptic response from the actuator when it is pressed. The interface allows configuration of the following signal parameters (Figure 6):

The software also enables the engineer to create custom waveforms. Once the software is configured, the information is sent to the kit’s processor via the USB cable.

A second evaluation kit, the PowerHap Z63000Z2910Z1Z44, is specifically designed for engineers taking advantage of the Boréas BOS1901CQT piezo haptic driver. This kit includes a base board, a step-up converter, two drivers, and a microcontroller. The base kit is supplied with one TDK piezoelectric haptic actuator (Figure 7).

The board is connected to a PC via a USB cable, uses the standard USB audio protocol, and appears as a normal audio output to any computer. Waveform prototyping (up to 190 voltspk-to-pk) and playback can be performed using the USB audio protocol to prototype haptic effects in software such as MATLAB, Python, and Audacity.

Haptic feedback using piezoelectric, ERM, and LRA actuators has enhanced touchscreen control in both consumer and industrial applications. However, advances in the direction of lower voltage, compact piezoelectric haptic actuators have extended the benefits of high definition haptic feedback to battery-powered devices.

At the same time, the design of piezoelectric haptic systems has been eased by the introduction of dedicated drivers that interface with popular application processors and offer support for a wide range of waveforms. The ready availability of evaluation kits for these devices from suppliers such as TDK enable experimentation and prototyping before committing to a hardware design. 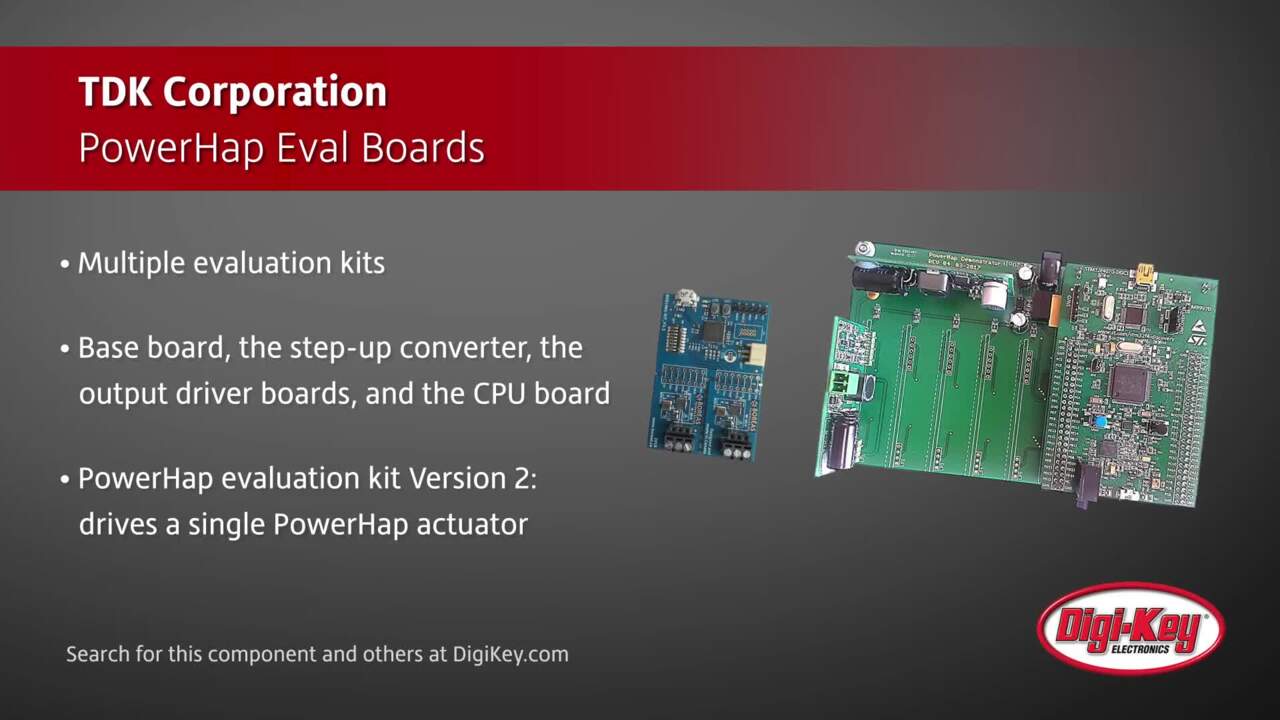