Coffee, nanoPower, and Building Blocks for the New Smart Energy

Back in 2011, the buzz about smart energy abounded! In North America, utilities were plugging away at installing smart meters. In Brazil, there was excitement about ANEEL, the regulatory agency, requiring a full smart meter build out in the entire country. In Europe, various utilities were developing their unique methods for communication from smart meters.

Now, in 2017, smart meters have been installed in most of North America and many countries in Europe and Asia. Utilities are monitoring power use and have eliminated the costly meter readers who used to walk neighborhoods, manually reading each meter. The vision of a complete smart energy build out is different, however. Energy measurement on each light bulb has not materialized, possibly due to the high cost of such systems compared to the energy cost to run a lamp. This energy cost discount is further enabled by low-energy-consuming light sources, such as compact fluorescent bulbs and LEDs. Maybe we’ve simply maximized our need for data at some levels of granularity. However, there’s no need for despair: despite one vision of smart energy not coming to fruition, many wonderful advancements have enabled a new vision.

One great example is coffee. Ten years ago in North America most people and restaurants made coffee in a glass or ceramic pot that then sat on a burner. That burner consumed energy and also slowly cooked the coffee, ruining the taste. Then, someone had the great idea of putting coffee into a thermos, simply keeping the heat of the coffee within itself. This step took coffee “offline” as it ceased to be connected to the power grid. Furthermore, coffee-making consumes less energy and results in a much better-tasting drink. What a great example of smart energy!

The coffee example leads into other concepts for engineering systems that both maximize performance and save energy. One great advancement is nanoPower. The nanoPower concept describes the current consumption of certain parts in their quiescent state, when they are not operating but not completely shut down either. Newer products, which take advantage of advanced analog CMOS process technology, operate with nanoamp currents that are almost immeasurable. The major energy-saving benefits come first from duty-cycling these systems; and secondly, by decentralizing the power-consumption architecture. Below are three examples of devices and circuits which provide the benefits of nanoPower.

Smoke detectors were among the first Internet of Things (IoT) devices. They need to run for 10 years on a battery, allowing for infrequent battery changes and operation during power outages. Figure 1 shows a typical modern smoke alarm consisting of a battery, multiple DC/DC converters, a microcontroller, RF communication, a sensor (which may be a variety of architectures), and a piezo buzzer. The table in Figure 1 gives example values of current consumption for each block, based on modern components. In the case of optical smoke sensors, peak currents to run LEDs will be in the mA range, but the average current drops as the LEDs are typically cycled relatively infrequently. In most alarms, the active circuitry may sample the air only 0.05% of the time, meaning the system runs in quiescent mode for 99.95% of the time. Discounting the RF circuit, which may have a completely different duty cycle, the main circuits in full power mode would consume 12.6 mA. During quiescent periods, the main circuit would consume 5.5 µA. Thus, the average current per second consumption by the active circuit is 12.6 mA x 0.0005 = 6.3 µA, resulting in an average current consumption of 11.8 µA. Now, any quiescent currents above one µA start to impact system battery life. In the ~10 µA current consumption range, each additional µA of current impacts a 1500 mAhr battery life by a single year.

Figure 1:  A typical, modern smoke alarm runs in quiescent mode most of the time, so the lower the quiescent current, the better for its battery life.

Another benefit of nanoPower comes from the ability to turn off circuits within the system. In this type of architecture, critical components such as battery monitoring and real-time clocks stay on, while major power consumers, such as the microcontroller and RF circuits, either turn off or go into their lowest power consumption mode. The circuit in Figure 2 shows a nanoPower window comparator monitoring a battery voltage. The comparator will only alarm when the battery goes above or below the allowable voltages, providing a valuable safety function and extending battery lifespan. The system microcontroller need not operate unless receiving an alarm from the comparator, which runs at a typical current of 900 nA. Essentially, this becomes a smart-energy architecture, conserving as much energy as possible while peeling off specific circuits for functions that must remain always on.

A final example is a power supply from a wall wart or battery, typically known as an ORing diode supply. In such supplies, good designers place a Schottky diode in series with the battery supply to limit the voltage drop and, hence, power loss across the diode while still protecting the circuit (Figure 3). For example, the new MAX40200 from Maxim drops as little as 85 mV when carrying as much current as 1 A, and typically drops 43 mV when carrying 500 mA. This performance is two to four times superior to the typical Schottky diode, again saving tens to hundreds of milliWatts of battery power, in a smart way.

How does all of this relate to coffee? Just like the coffee, the architecture is changing. Various sub-systems essentially disconnect from the central processor and check in periodically while drastically reducing energy consumption in the process. Advanced processing and analog architecture enable these building blocks to consume unprecedentedly low amounts of power. The new smart energy movement is more than energy measurement and communication. The new smart energy is intelligent system architecture combined with advanced components to improve system battery life and reliability while unlocking new applications. 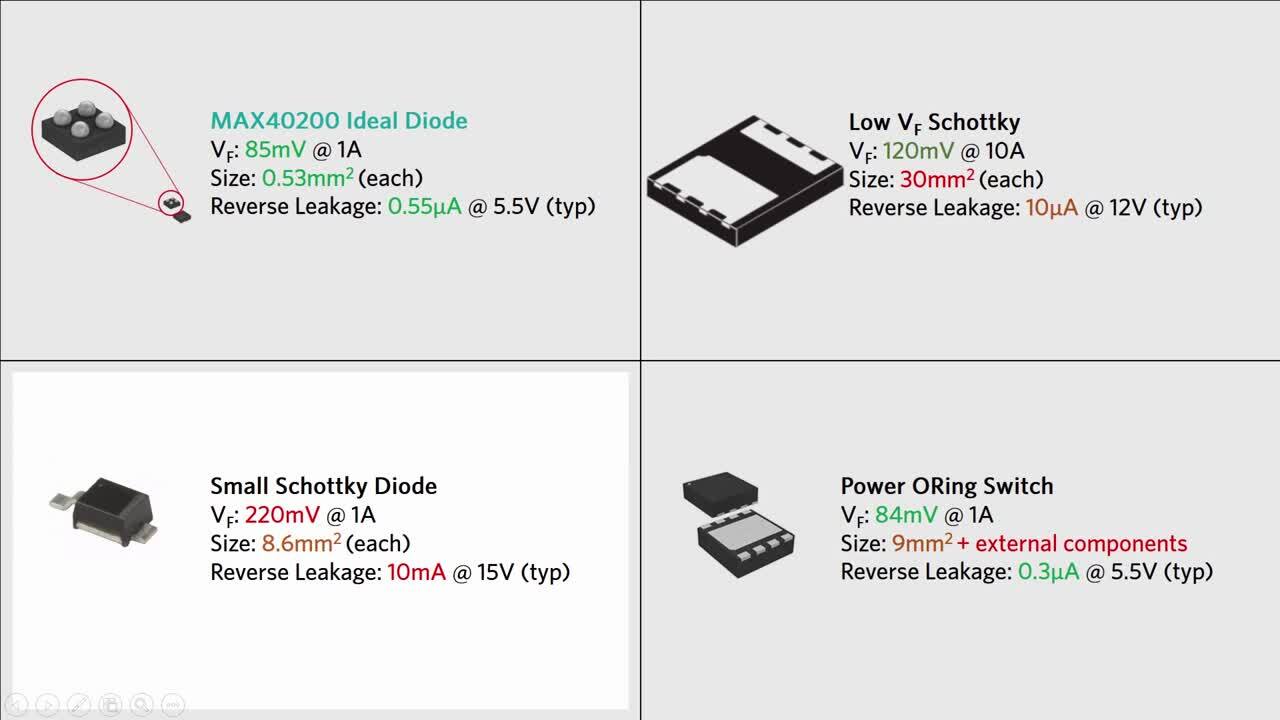